Bring to simmer for 15 minutes.  Process in food processor until smooth like oatmeal. Return to pot.

Add one recipe Joy of Cooking Cream Sauce and

Process in the food processor until smooth (as oatmeal).  Add to cooked tomato sauce, broth mix.

Adjust seasoning with salt and pepper.

Another recipe I don’t remember ever having tasted.  But winter is coming, and with its cold chill and creeping dusk, soup seemed like an appropriate choice.  I was also attracted to this one for its crumpled, misshapen paper.  It jutted oddly from the recipe box and, once liberated, I found it was spotted with oil and clumsy with edits and errors.  It’s been folded multiple times into multiple shapes and dimensions.  It has the crisp, delicate feel of old paper.  There are a few spots where she crossed things off and corrected them.  I tried to recreate what she may have been intending to write, or what daydream brought her off course, or what interesting knock at the door drew her attention for the moment.  Some of the words in the recipe are spelled differently, like “smoothe” and “creame.”  That makes me wonder if maybe she wrote this while she was living in Europe and her spelling was influenced by the local culture.  I held the paper up to my face, closed my eyes and inhaled, hoping for some magical scent.  But all I smelled was air. It’s all that same desperate searching that has you lying in bed, listening intently for “a sign,” attributing meaning to air vents or the cat fight outside. Hoping for something, anything, that will bring a warm wave of recognition or understanding or meaning.  But…usually it’s just air, or a pen running out of ink, or poor spelling, or angry cats.  And you’re left to create your own meaning, which feels far less magical and far more frustrating.

Full disclosure: I totally screwed up this recipe.  I read the recipe to say “add 1 recipe Joy of Cooking creame sauce,” followed by “2 C chicken broth, 2 C tomatoes.”  I took that to mean that the “Joy of Cooking creame sauce” consisted of chicken broth and tomatoes.  Yes, it crossed my mind that there is nothing creamy about those ingredients and to call it a “cream sauce” would be misleading, at best.  But I’m new to the game and don’t know my fricassee from my julienne, so I dismissed my apprehension as naiveté.  As I looked at the recipe closer, however, it became clear that there is some mysterious “creame sauce” that is supposed to be added to this recipe in order to make it more that just puréed tomatoes.  I don’t own “The Joy of Cooking” and couldn’t find a recipe online.  As the tomato juice stung my fingers and the food processor mocked me, I stared at my failure and was at a loss.  I don’t have “creame-esque” ingredients just sitting around and, even if I did, I wouldn’t know how to “sauce” them if my life depended on it.  After several minutes of staring and moving utensils from one area to another, I laughed and poured myself a glass of wine.  I thought, “what would Binky do?,” immediately realizing, of course, that I had just answered my own question.

Signs come in all shapes and sizes. 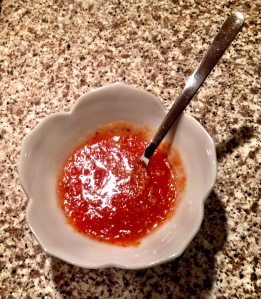 Mother’s day is here.  Again.  For the 18th time.  And, again, I don’t know how I feel.  Like birthdays and anniversaries, I now sometimes forget that these days mean something.  Meant something.  Are supposed to mean something.  It’s a confusing basket of sadness and anger and longing and resentment and idealization and fantasy.  And, it’s just a day.  Just like every other day that hasn’t been ok because someone you need isn’t here anymore.  So many people you need aren’t here anymore.  It’s so much and so nothing at the same time. The sun continues to rise, the gossip continues to matter, the mundane marches on.  Does the day mean something because it actually does, or because I’m told that it means something?  That it’s a day to wallow and remember and display the emotion that’s been present/neglected/dormant/healed for 18 years?  This is the acceptable time to weep, even long after your healing should have taken place.  For what purpose?  What is the difference between ritual and pandering?  Honoring and relishing?

And, what does it mean that I am not a mother?  Is this the wise, responsible, intellectual decision that I tell myself it is?  Or, is this a fear-based choice?  Is it predicated on remembering the mother-child relationship, and what it means, and how much it can hurt when it is taken away?  To step out onto the ledge and risk the fear and uncertainty and pain that may follow…just because the experience may be so wondrous and beautiful.  Surely no rational person would ever do this.  Nobody with any sense would invite themselves to feel so strongly about another person, knowing that they will inevitably watch that person endure hardship, pain, loss.  And knowing that they will be unable to fix it, and will have to watch helplessly as someone they long to protect feels pain.  It is a venture in foolishness.  It is the triumph of hope over experience.  And, apparently (from what my breeder-friends tell me), it is worth it.

Grate swiss or parmesan cheese over the soup and broil

This recipe is SUPER good, and incredibly easy.  The instructions were minimal, but I think that’s because the recipe is quite inexact.  Put it all together.  Heat it up.  Done.

It reminds me of the fact that, in addition to being the glamorous woman-of-the-world I often remember her to be, she was also a single, working mother for phases of her life.  It reminds me of my latchkey kid days, when we lived in a small townhouse along the highway.  My mom would leave my brother and I $5 on the counter to go buy lunch at the grocery store during our days off of school.  We would split the money evenly, and I remember exactly how we would spend it.  My brother was more set on quantity, buying oodles of baked goods from the “day old” rack to make sandwiches.  I, impulsively focused on pleasure over sustenance, would purchase a 2 Liter of Tahitian Treat and a pack of Twinkies.  The sugar high and running through the weeds and hot, sun-toasted skin that followed were euphoric.  The crash and sunburn and irritability that followed (particularly in the context of a carbo-loaded, planful, irritated big brother), was a living story arc – characters introduced/setup (blah blah home alone kids blah) > inciting incident (WHAT WILL WE EAT?!?! WE’RE HOME ALONE!!!) > Conflict (This is MY $2.50!! I wanna buy THIS?!?) > Full Crisis/Climax (me running around on a crazy sugar high while my brother attempts to beat me with a loaf of day old bread) > Solution (I will lick the frosting out of my Twinkie wrappers while enduring muscle cramps, while my brother leaves to go skateboarding).  CLOSE SCENE.

Oh, weren’t we talking about soup?  Yes….the soup.  I love French Onion soup, and order it at any and all restaurants.  And, I have to admit, this tasted just as good as the soup I’ve ordered out and about.  The fancy-factor is the bread/crouton and cheese baked on top, which I really couldn’t figure out at home.  I put a chunk of artisan bread and a slice of cheese on top and put it in the broiler, but it didn’t turn out like it does at restaurants.  The cheese was melty and good, but it was at the bottom of the bowl, instead of bubbly and on the surface. I have NOIDEA how one fixes that.

Despite the fact that it wasn’t “restaurant perfect,” I will definitely make this again.  It’s an easy, quick, delicious soup.  Perhaps I’ll eat it with Tahitian Treat and Twinkies… 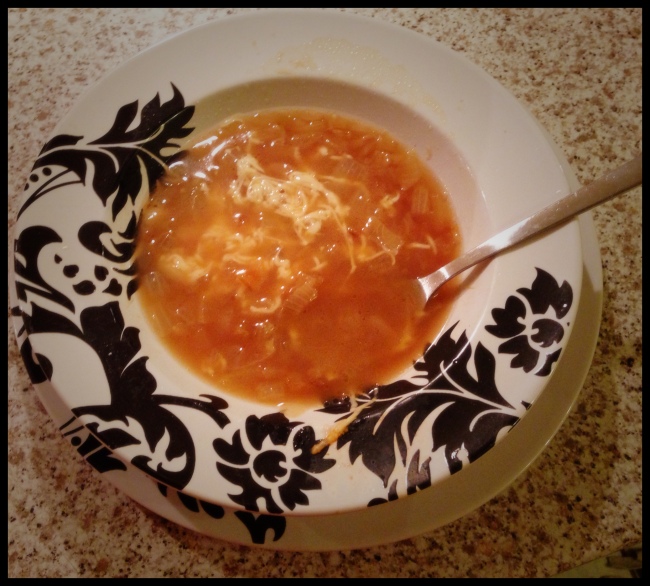 I don’t remember my mom ever baking this, but it somehow feels familiar anyway.  Zucchini cake seems very Minnesotan to me.  Nobody can make a vegetable sweet and unhealthy like a Midwesterner (rhubarb pie, anyone?).  I’m not a baker, by any means.  I tend to be inexact in my calculations, which apparently doesn’t bode well for baking.

For this recipe, I somehow neglected to have baking soda in my cupboard (like I said, I’m not a baker).  Thanks to the wonders of Google, I discovered that you can substitute baking powder for baking soda.  I ended up doing the substitution, and it seemed to work fine.  I used a can of crushed pineapple instead of measuring out 2 cups (inexact…).  I shredded the zucchini in an electric chopper (like one of those Ninja things they sell on TV), and that worked pretty slick.  I probably did it a little too long so the zucchini was more pureed than “grated.”

So, even with substitutions and inexact measurements and mechanically shredded zucchini and a centigrade oven and a non-baker…..this recipe turned out awesome!  I had to bake it a little longer than the recipe called for (maybe an extra ten minutes).  I decided that it’s more a bread than a cake.  I think this was partly because of the loaf-shape and partly so that I could justify putting butter on my slice (Only a crazy person would put butter on cake, right?  Thank God it was bread…).  The bread is really moist (thanks to the pineapple, maybe?) and it’s not too sweet.  The recipe makes two good-sized loafs.

We really enjoyed the smell of the bread baking and sweet goodness.   I’ll definitely make it again when I’m feeling all Midwestern and domestic and boldly inexact.  It turns out, apparently, that I like baking.  So, maybe I learned something after all.

Tasty Rating (my rating of how good it is based on how quickly my spouse and I eat it all):  4 days  (all while sober, so that’s pretty fast)

I so don’t want to mess this up.

What does that even mean? Cook good food? Remember long-forgotten events? Experience insights and epiphanies that make me whole, that yield some worthwhile insight from all the loss and sadness?

I don’t know what this is supposed to be.  I feel so much pressure to pick the right “first recipe.”  Like it is some magical key that will unlock the hidden truths.  I remember eating some of the dishes in this box, but not many.  Not as many as I would like.  I’m torn between the hand-written cards, where the ink is obstructed by drops of spilled ingredients; the typewriter-written cards, with their slightly off-kilter text; the recipes cut out from magazines and stuck to the card with yellowed, crumbling tape.  The contents of this box are so diverse – pasta recipes gathered from Italian neighbors, fruitpunch made from frozen concentrate, “Better Than Sex Cake,” as featured in Playboy, 1984.

I guess that sort of fits, though.  My memories of my mom are so diverse.  She wore a mink coat and hosted dinner parties for my dad’s foreign colleagues, serving fancy dishes while my brother and I ate macaroni in the kitchen.  She also bought packages of Cub Foods bakery cookies, storing then in the freezer in an effort to keep herself from eating them all (but, of course, she just learned that they taste better frozen).  She drank wine from a box stored on top of the refrigerator, but finished meals with an expensive “after dinner drink.”  She was fiercely independent and strong, but put up with shit  for years.  She was so wise, but made stupid decisions that even a child could see.

So, I chose. Zucchini Cake and French Onion Soup…

Memories, a meal at a time